It’s fall, and all I want lately is soup and grilled cheese. I think my mother always made it when it got cold, and there’s something so cozy about a big bowl of soup. However, this aint’ my momma’s soup. This soup is CHUNKY. Maybe unintentionally chunky, as I admittedly have been adding a little bit of water to each bowl to “soup” it up a bit more. So perhaps it’s more of a stew then? Either way, it’s pretty damn good. I might do a few things differently next time, like add ham and lessen the ingredients, but other than that it’s a winner!

Note: Since you need to bake potatoes for this recipe, it requires some extra lead time. Figure in about an hour or so of baking, or pre-bake your potatoes the night before. The whole process, if you bake the potatoes and make the soup all in the same night, is about 2 hours. So, quite the time hog just for soup. But trust me, totally worth it (and lots of leftovers, to boot!). 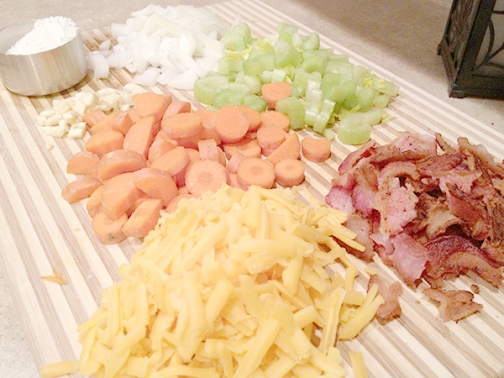 How to Make it:

Preheat oven to 350 degrees F. Scrub potatoes until they are clean, pat dry. Using a fork, prick a few holes around the potato to keep it from exploding in the oven (I’ve forgotten this before.. :P). Wrap each potato in aluminum foil and place in oven to bake for about an hour. Remove from oven when potatoes are soft at the center, set aside to cool. 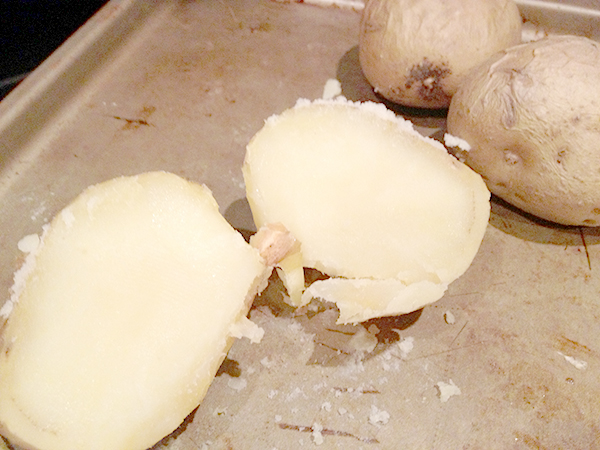 While potatoes cool, prepare veggies and set aside. Take the cooled potatoes and cut them in half. Scoop potato out from skin and divide each into their own bowl. Mash the potato innards until they are smoother. Don’t over mash, as this will affect the consistency of your soup. If you want a watery soup, finely mashing the potatoes will decrease absorption of water. Thicker, unmashed potatoes will absorb more water. Set bowls aside. 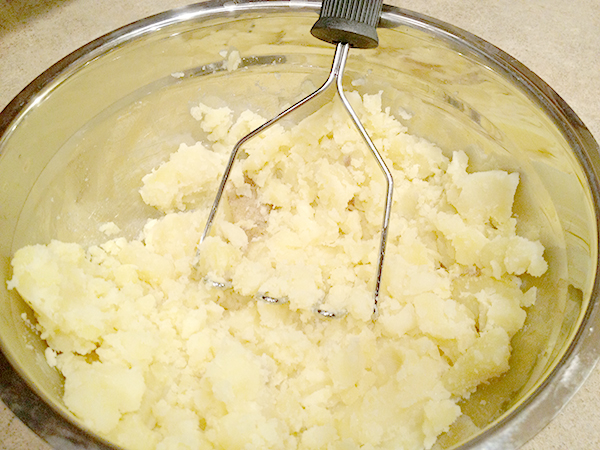 In a griddle or frying pan, cook bacon until crispy. Reserve bacon grease and set aside. In a separate small frying pan, combine butter, white onions, garlic and one of the slices of bacon (crumbled). When onions are slightly browned, add butter and flour and mix very quickly. The flour may stick to the pan, and in this case I added more butter. This causes a little bit of a mess, but it adds a nice flavor  and thickness to the soup later on. Once the mixture is fully coated, remove from heat and set aside. 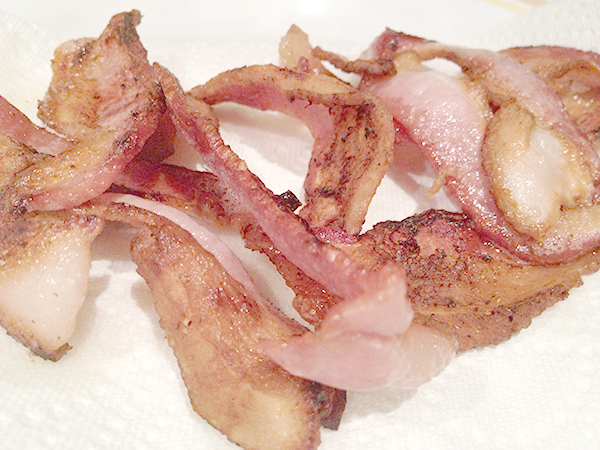 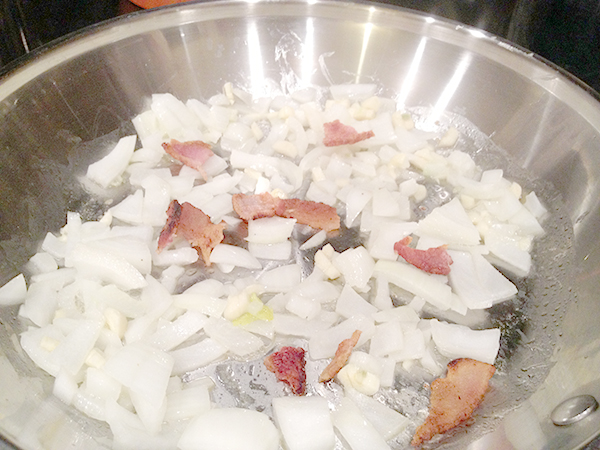 In a large pot, combine all ingredients in the following order: potatoes, onion flour mixture, broth, carrots and celery, cheese and greek yogurt. Add seasonings to taste (parsley, salt, pepper) and stir well. Bring soup to a rapid bowl, stirring very often. The heat will cause the potatoes to try and stick to the bottom of the pan, so frequent stirring in the first 5-10 minutes is essential. Once soup is boiling, reduce heat to simmer and cook for another 20 minutes. Again, be sure to stir frequently. 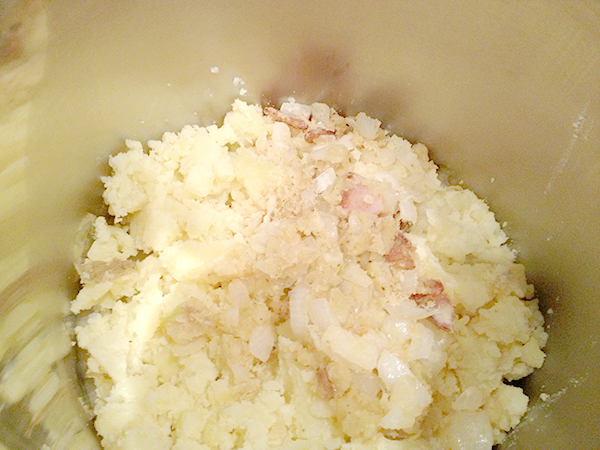 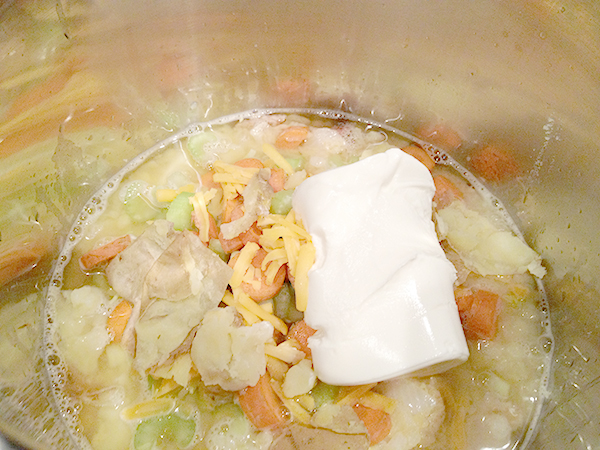 While the soup simmers, over medium-high heat, fry the remaining potato skins in the reserved bacon grease until they are nice and crispy. I know, I know, frying things in bacon grease = ultra horrible for you. It was the first time I ever did such a thing, but I’m telling you, the end result is freaking amazing. Once the potato skins are brown and crispy, set aside. When the skins are cooled, break them up into smaller pieces. This should be easy to do with your hands, as they will be pretty crispy and a little charred. Set aside.

Remove pot from heat and spoon soup into a bowl. Add a little bit of shredded cheese, broken up potato skins, crumbled bacon and green onions on top of the soup. If the soup appears too thick, dilute with water until desired consistency. Serve hot with sourdough bread! 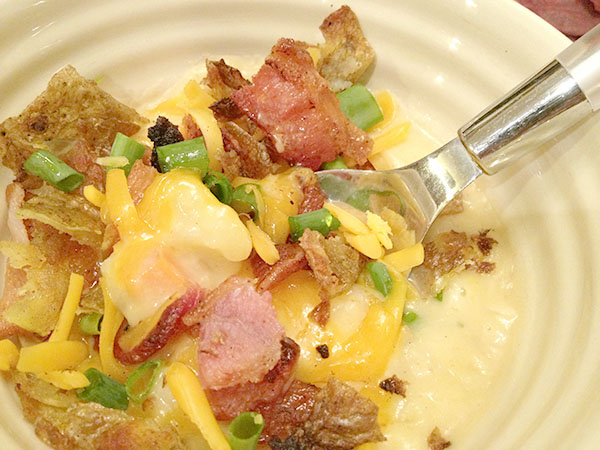 This aint’ your momma’s potato soup!